The overview of Prestressed Concrete Poles

support street lights, electric power lines, antenna masts, and overhead power lines for electric trains. In part because they can be factory produced, prestressed concrete poles are now used widely through out Europe, Japan and the Soviet Union, and their use in the United States and Canada is growing.

Compared with normally reinforced concrete poles, prestressed concrete poles offer several advantages: Pre-stressed poles are lighter and stronger, and they require less reinforcing steel. The concrete is generally in compression, so cracking is unlikely except from rough handling, and the concrete that is used is usually of higher strength so it can withstand the prestressing operation. Due to the special manufacturing process, in which the poles are spun at high speeds, they have a smoother surface that is denser and less permeable. This lower permeability in combination with the absence of cracks prevents corrosion of reinforcement or prestressing wire. With the use of 10,000-and12,000-psi concrete that is now available, prestressed poles can be made even stronger and more slender. Admixtures that make concrete an electrical insulator may also, in the future, allow integrated design.

Prestressed poles can be made in many shapes. Poles up to 40 feet long with square or rectangular solid cross- sections are easy to manufacture, occupy less space during transportation, and facilitate positioning of steel at corners for maximum resisting moment at a given depth. Circular hollow cross-sections are better for longer poles. Because they’re hollow, they weigh less. Because they’re circular, strength is equal in all directions. And because they are spun at high speeds in the casting operation, the concrete is denser and stronger. Other shapes that can also be spin-cast are hexagonal, octagonal, square with chamfered corners, and triangular with chamfered edges. Cylindrical poles can be made, but most spun-cast poles have a uniform taper from top to bottom. The taper usually ranges from 0.15 to 0.18 inch per foot.

Vierendeel poles (named for Belgian engineer, M.Vierendeel) are sometimes used when poles over 30 feet high will encounter high transverse loads. The thin elements and larger exposed areas of Vierendeel poles, though, are more susceptible to failure of the concrete and to corrosion. Also, if the horizontal webs are not far enough apart, they will be misused for climbing.

Apole generally acts as a cantilevered structure, and should be designed and analyzed as a tapered member with combined axial and bending loads. Because shear forces are small compared to bending moments, prestressed concrete poles are very resilient. Axial loads are small, too, and are generally ignored except when the structure is guyed.

In the United States, prestressed concrete poles should be designed for ultimate strength according to the basic assumptions sand requirements of Building Code Requirements for Reinforced Concrete, ACI 31883, modified to include the effects of prestressing. Poles should be designed to withstand the maximum loading condition, including design overload factors, without exceeding the ultimate strength of the pole, and under normal working conditions without exceeding the cracking moment of the pole. Loads that must be considered are wind, ice, wire, weight of fixtures, construction loads, maintenance loads and transportation loads.

Prestressed concrete poles can be manufactured in specialized factories by spin-casting and heated curing, or, as in India, they can be precast in remote areas on site, using portable pretensioning beds, local untrained labor, air curing and specially designed bullock carts to transport and erect the poles. Long poles may be cast in sections and assembled on site by post-tensioning or splicing. In the United States, prestressed poles are made by spin-casting or by the long line method, both of which are briefly described here. In general, prestressed concrete poles are made of a dense concrete with a 28-day compressive strength of 3000 to 8500 psi; but some poles have been made with 10,000-and12,000-psi concrete.

Centrifugal casting--In most of Europe and Japan, centrifugal casting or spin-casting is used to make hollow, tapered concrete poles. A steel form is placed on a spinning machine, partially filled with a precalculated amount of concrete, then spun for several minutes. The tremendous centrifugal force created by the spinning consolidates the concrete by forcing it against the form. Excess water that is squeezed out of the concrete is poured from the hollow cavity created in the center of the pole. After spinning, the form is steam-cured until the strength of the concrete is 3500 psi. The prestressing wire is then released, and the pole is air-cured for 28 days. The result: a hollow pole made of dense concrete.

Mensel’s Method--In this East German method of casting concrete poles, poles are manufactured on a production line. Lightweight horizontal molds are carried from work station to work station on mobile frames. Vibration is used to consolidate the concrete, and ablockout is used  to form the hollow cavity of the pole. After the concrete has begun to harden, the blockout is rotated slowly and finally removed when the concrete has fully hardened. Curing is done in a 24-hour cycle. The temperature of the poles is raised to 163 degrees F, held constant, then lowered back to room temperature.

Long line method--This is the most common method for casting solid sections, either square, rectangular, channeled, I-orY-shaped. Forms are placed end to end on a casting bed up to 400 feet long. Prestressing wires are threaded through holes in the bulkheads of the forms and pretensioned against abutments at each end of the line of forms. Several poles are thus pretensioned in one operation. Concrete is compacted with external vibrators. The long line method can be used in any precast yard or on site.

Although prestressed concrete poles are generally resilient and resistant to cracking, they do require care in handling, transporting and erecting. Here are a few tips: 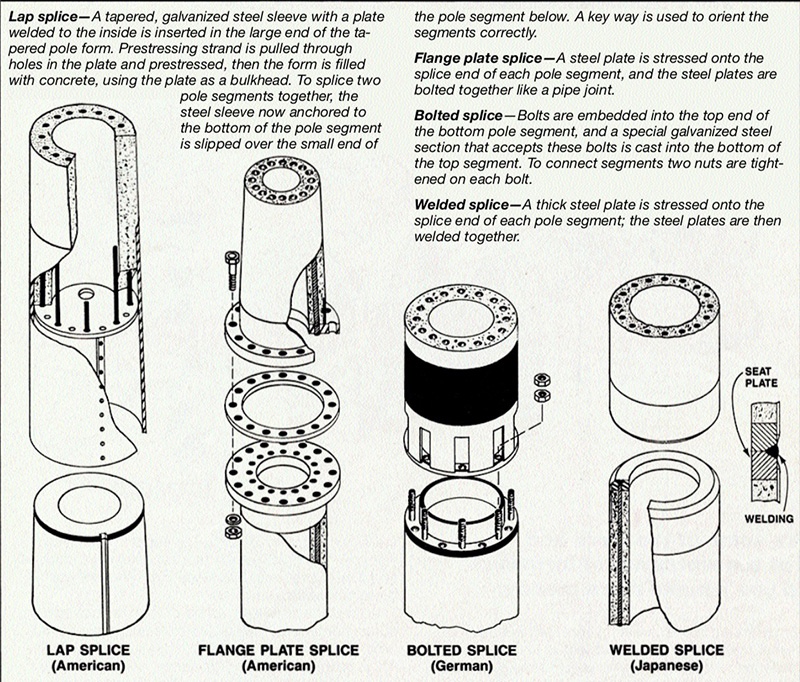 Handle prestressed poles with the major axis in the horizontal direction, using a two-point balanced pickup.

• Handle poles gently while unloading them from trucks, railroad cars or barges. Never throw them in a pile.

• Stack poles level and support them so their own dead weight will not cause them to sag.

• While transporting a pole by pole trailer, keep the pole from oscillating. Use a strong back, if necessary, to keep the pole rigid, so that excessive deflection doesn’t cause cracking.