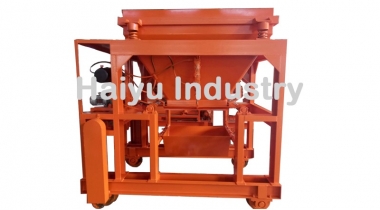 The concrete pile feeding machine and the pile distribution machine are the necessary efficiency equipment for the production of pre-stressed concrete pile(PC, PTC, PHC), whose main function is to transfer the concrete material to the special mechanical equipment in the pile steel mold. It has the characteristics of compact structure, simple operation, convenient maintenance and clear function.

The feeding machine is composed of frame, hopper, vibration, shock absorber spring, walking mechanism, clamping bucket lifting mechanism and electric system, and the hopper capacity of distribution machine is the same as that of hopper (diameter: 500mm, 12m long pile needs about concrete 1.8m3), when used, the feeder is driven across the steel mould, and after entering the upper part of the steel mould, unloading door using the double cylinder synchronous open way to prevent the concrete fall into the steel mold when unloading, falling material can be controlled by the line control box button at random to move the cylinder expansion or vibration time to open the vibration.

The pile distribution machine is composed of a frame, hopper, vibration, damping spring, walking mechanism, electrical system composition, the hopper capacity of distributor is slightly larger than the discharging capacity of mixer, because the steel mold distribution needs a long time, the distributor speed should be faster than the feeder to reduce the waiting time, there is a damping spring between the hopper and the frame, the parameters of the spring can not only satisfy the vibration of the vibrating device when discharging, but also eliminate the segregation of the concrete in the hopper caused by the vibration of the vehicle, and avoid the damage to the hopper by vibration power.